For more poems, check out this page.

And even a skyscraper

little in the wind

ripple absent, so still and waved,

Stave off the crashing worlds of sorrow,

Clench me close-tight in every midnight and morrow.

When upon the uneven darkness and wicked I stumble,

Velvet me as on that down-ness I tumble.

If hell hails, then haunts my will to brittle,

Do not untend me, in your breast be my committal.

If when seeking my work in this realm of compete,

Help me complete my orders while supine at His feet.

And in decade and day that my flesh pour to the grave,

Keep Your promise, and make me pure brave:

Stay with me in that graying, colding dead place,

And unveil Yourself, love me, reveal me Thy grace!

That rived bone, the plummeted bomb,

The flesh that you adored so dear,

The comrade and confidant to earth gone,

The spasm and twinge of absented love,

The fretful scramble to gorge the bank,

The glances for lightning from Above,

The jostling for a surpassing rank.

Oh! how all items are so serious!

Existence a carcinogen, a hurricane of tumors!

You really should be exquisitely delirious,

If you could only get God’s sense of humor!

There are no tragedies, no despair’d black

A broken life, is but a broken nail

Everything simply, repeatedly grows back

And once again, you are whole and hale.

The joyous weeping wind, reaping the last heat of a summer just by,

Cools itself and rumble-swirls with the company of the breaking world!

Each year are dumbfounded by the Deity’s degringolade plan:

Grumble-crinkle as they spiral to the ground in despair-

And the human souls therein this un-inside-

Watch the transfiguration and likewise their thereins upon nature ride:

And a sadness whelms them as the collapsing parade of another season fade:

Yet, if wise, also evinced by the earth’s ellipse: that by time they are not made:

The I which sees through the eyes never stalls –

And that they may know.

So all our falls are fallacious, for we were fashioned a forever-flawless:

The dervish sphere may, for law, spin asunder yet we are eternal lawless!

Total Tilt (or Ever Rise!)

wow! this flighted-crucifix through blue though not blue bare

Pinions faintly tip, your total tilt, to round you round some rondure unseen.

scurried thing search? no, not this light – uptucked grapplers!

and your eyes aloft, toward the apogee of the tentless!

you, eagle, know me, are me, though me plumped to this flat this.

but we wait, we patient, circle realms, eyes both toward the ever up

we live not for life, but for some Invisible we know not of, yet aching sense 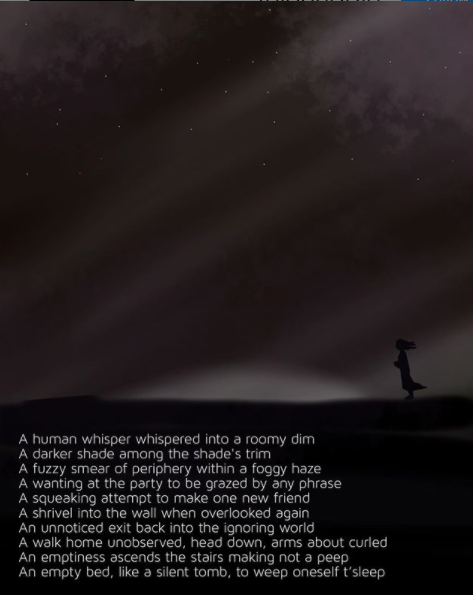