Of the books I’ve read, these I feel are the most vital for understanding the present, making sense of the past, and predicting the future. It deals with things seen and unseen; the brain, left and right; mind, conscious, subconscious, unconscious, and collective. I’ll add my thoughts on these books over time. 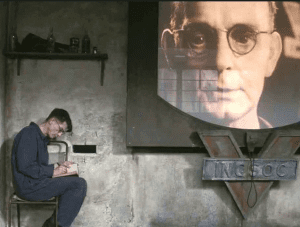 This is the most important non-spiritual book ever written. It haunts anyone who reads it, and haunts them more as they witness the nightmare world Orwell created play out on the nightly news in big ways and small. It is a story of human beings under total thought and language control and proud of it. Civilians spy on one another, children who “discover” unorthodox thinking in adults are lauded, and everyone around you is waiting for a slip of the tongue to send you away for punishment. Even body language – such as the way your back muscles move “could give you away” as someone not inline with the Party. (How can the Leftwing today not see how they are becoming 1984‘s inner-party?) There are selected villains that the civilians must hate. The government has expanded to control everything, and is really just an enormous espionage machine. Blatant inversions of truth, for instance, the Ministry of Love is concerned with draconian justice; the Ministry of Peace concerns itself with war, are swallowed by the masses without consideration. The conclusion is terrifying – not the torture in Room 101, that’s child’s play – but that Winston Smith, the main character, has come to love Big Brother. Indeed, we have to be vigilant that we do not come to adore our oppressors, that we do not fall in love with the need to obey – that we don’t deny those psychological proclivities in ourselves. 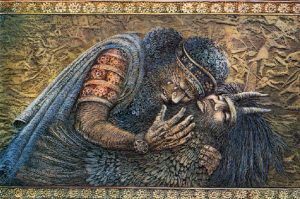 My favorite part of Gilgamesh is when our hero decides he must go conquer Humbaba in the Cedar Woods. Humbaba is symbolic of our greatest fears. When Humbaba “roars it is like the torrent of the storm, his breath is like fire, and his jaws are death itself.” In our life, the storm is leaving the job to track our beast of a vision, seeking God as a knowing. The fire is the heat of poverty, illness, relational upset, failure, lost reputation. The jaws of death are indeed the fear of death at every turn. Human life is so short, we may be wasting our time if we don’t make it. The wise council of Uruk tell Gilgamesh that he should not go forward, that he has a good life right now – why waste it? “Gilgamesh, you are young,” they say, “your courage carries you too far, you cannot know what this enterprise means which you plan. We have heard that Humbaba is not like men who die, his weapons are such that none can stand against them; the forest stretches for ten thousand leagues in every direction, who would willingly go down to explore its depths…. Why do you crave this thing, Gilgamesh?” They do not comprehend why he must go forward and do this, go on this journey. His best friend and servant, Enkidu, likewise tries to dissuade him: “What man would willingly walk into that country and explore its depths.” Gilgamesh “laughed when he heard these words,” and said in reply to his naysayers: “Only gods live forever… but as for us men, our days are numbered, our occupations are a breath of wind. How is this, already you are afraid. I will go first although I am your lord…” Later Gilgamesh proclaims to God, “I will go to the country where the cedar is cut. I will set up my name where the names of famous men are written; and where no man’s name is written I will raise a monument to the gods.” Indeed, he is going no matter what anyone else thinks! Amen!

What’s also interesting about this story, is after he has told everyone, even his mother, that he shall go fight Humbaba, he goes back to the very counsellors who told him he was a fool and gets advice from them. We, dear readers, must remember this, the people who tell  you “no, don’t do it,” may – if they ultimately accept your decision – still have worthwhile wisdom for us to heed. Their caution is annoying at the start, but their caution as we proceed may save us.

Further, we note that Gilgamesh prays constantly, he is not a man of pure reason. He believes in the Divine. The gods promise him that they will give him the power of the winds which will come when he needs them, in the pitch of battle. God promises you too the wind. What is the wind? Wind is our prayers, the invisible power of Divinity – whence it comes we do not know.

Is our fearless hero fearless the whole way? Not at all. His will falters, after some bad dreams and just prior to battle – he wishes to leave, he passes out (cf. Dante and Arjuna also swoon before their great task). For you, it is okay to feel scared and freeze before you go on. His friend and servant Enkidu, who at one time told him to stay back, steps up and drives him forward and encourages him. Amazing. You will have friends who insisted that you do not do what you were fashioned to do on this earth, but those same true friends will pick you up when you fall and push you on.

There are more beautiful parts to this story – such as when Gilgamesh walks through a tunnel of darkness for days and days on end. Any man who has tried to achieve something great knows this feeling, where you just keep moving forward, and there is no light, and seemingly no hope, yet we walk on, we cannot turn back. This has happened in my life so often. Those long, dark tunnels appear in any great endeavor: it may be a spiritual, entrepreneurial, artistic, or physical journey such as sport or illness. Gilgamesh is such a beautiful book, and the translation by Penguin Classics is special.